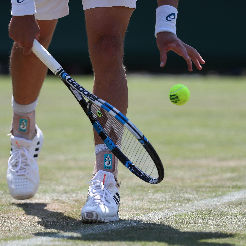 We are currently living in very strange times, and the current pandemic charging indiscriminately across the world has meant much of the international seasonal sporting calendar has had to be re-thought in 2020 due to the virulent corona virus.

Wimbledon
Only this week, April started with the announcement that Wimbledon has been cancelled for the first time since World War Two due to the world wide pandemic. The tournament was due to be played between 29 June and 12 July.

As you might imagine this was not a decision taken lightly nor without consequence, but ultimately it seems like it was the only decision to be made.

The entire grass-court season has been abandoned, and there will be no professional tennis anywhere in the world until at least 13 July.

“This is a decision that we have not taken lightly, and we have done so with the highest regard for public health and the well-being of all those who come together to make Wimbledon happen,” said Ian Hewitt, All England Lawn Tennis Club chairman.

“It has weighed heavily on our minds that the staging of the Championships has only been interrupted previously by World Wars but, following thorough and extensive consideration of all scenarios, we believe it is ultimately the right decision to cancel this year’s Championships, and instead concentrate on how we can use the breadth of Wimbledon’s resources to help those in our local communities and beyond.

“Our thoughts are with all those who have been and continue to be affected by these unprecedented times.”

And it’s not only the grass court season that has been affected, later tournaments due to be played further along in the year have also been postponed. Indeed there will be no European clay court season, in its regular slot at least.

French Open
The French Open was due to begin in May but has been moved to the autumn schedule and will now run from 20 September to 4 October due to the global pandemic.  This outdoor clay court tournament is part of the Grand Slam series and is held at the Stade Roland Garros in Paris.  It will be the 124th French Open and it is now the last Grand slam event of 2020.

US Open
Meanwhile, across the pond, the US tennis association is continuing to plan for the 2020 US Open due to run from 24 August to 13 September at Flushing Meadows, Queens, New York.

However right now the National Tennis Centre is being re-commissioned into almost 100,000 square feet of supplemental hospital feet.  The first Covid-19 patients are expected to arrive at the Centre on 10 April where 12 tennis courts have been converted into 250 hospital beds.

In Australian news reports CEO Craig Tiley said they were preparing for the possibility that international players will have to undergo quarantine, or for the tournament to go ahead without fans in the stadiums.

So for now in this strange world, I leave you with the words of 2006 Wimbledon champion Amelia Mauresmo talking on Twitter at the beginning of April:

“I think we are going to have to draw a line under the 2020 tennis season.

“An international circuit = players of all nationalities, as well as coaches, spectators and those coming from all four corners of the world to bring these events to life.