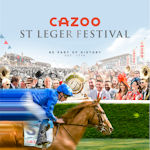 Finding the top St Leger Festival betting sites is not just about placing hassle-free bets at good odds, the best betting sites offer a ton of data, in-depth statistics and resources to bring you closer than ever to the action. They also provide a massive assortment of Betting Markets, Accas, Outrights and the ability to bet on the fly with St Leger Festival live betting.

One of the most prestigious race weeks of the British horse racing calendar, the St. Leger Festival. A unique blend of history and top-class horse racing during the four-day September extravaganza, these are the key races:

St Leger Festival Day 1: Wednesday, 14th September 2023 – St Leger Legends Day – retired celebrities of the saddle dust off their breeches and return to action in the feature event competing in the The Leger Legends race, a contest run on the straight mile, raising money for the Northern Racing College and Jack Berry House, a rehabilitation facility for injured jockeys.

Doncaster is one of the oldest established centres for horse racing in Britain, with records of regular race meetings going back to the 16th century.

It is host to the world’s oldest horse race, originally called the Doncaster Gold Cup, established in 1766. It pre-dates Doncaster’s St. Leger Stakes by ten years, and is the venue’s oldest surviving race. It was first run over four miles at Cantley Common until moving to Town Moor, where it still takes place, ten years later.

Meanwhile, in 1776, Colonel Anthony St Leger founded a second race in which five horses ran. This is also still running and known as the St Leger Stakes. This race is the oldest of the five British Classics, is the last to be run each year and its distance is longer than any of the other four.

So, Doncaster has the distinction of both starting and ending the flat season on turf and every September it hosts the prestigious four-day St. Leger Festival – acclaimed as the premier sporting occasion of the Autumn calendar.

The penultimate day of the festival attracts some of the most prestigious racing of the week, with the Doncaster Cup – the oldest race currently running under the Rules of Horse Racing – taking centre stage. The Doncaster Cup is also part of the Stayers Triple Crown along with the Ascot Gold Cup and the Goodwood Cup.

The Festival’s flagship day closes the proceedings, bringing the four days to a dramatic climax with the biggest race card of the week and the running of the World’s oldest Classic, the St Leger Stakes. Now the best staying thoroughbreds in Britain and Ireland compete over two and a quarter miles on the Friday of the St Leger Festival.

The St Leger has rarely featured Triple Crown contenders in recent decades, with the only one in recent years being the 2012 2,000 Guineas and Derby winner Camelot, who finished second in the St Leger.

More history was made at Doncaster in 1992 when it staged the first ever Sunday meeting on a British racecourse, a crowd of 23,000 turned up despite there being no betting.

Today, after more than four hundred years of racing, the St. Leger is undoubtedly still the highlight of Doncaster’s year. Throughout the racing calendar there is a full programme of top class racing, with flat racing in the summer and jumping action all winter.

The most celebrated winner in the modern era is Mark Johnston’s popular chestnut Double Trigger, whose victory in 1995 saw him complete the Stayers’ Triple Crown – the Ascot Gold Cup, the Goodwood Cup and, of course, the Doncaster Cup. Trigger’s three wins are commemorated by a bronze statue adjacent to the racecourse’s main grandstand.